During the last snow Deirdre ní Dhubhghaill @2DGraphicDesign asked me was I going to make a snow labyrinth. It just did n't seem like something I wanted to do.
We have had 28cm - 44cm of snow depending on where you stand in the garden since 7.45am GMT. Before the sunset I was out with my youngest too trampling around the garden. The snow is powdery and fine. After the children went in I pottered around. At the front right of the house there is a space which was un touch and it seemed perfect to walk a winter solstice labyrinth and I did.
My digital camera has finally died so I'm back to the camera phone so photos are not great but it will give you an idea of what it looks like. 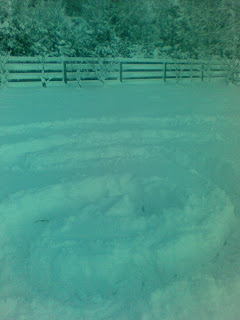 There is more snow forecasted. Tomorrow I will build the walls higher and place little tea light candles along the path. 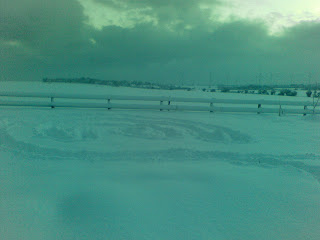 Although it would be lovely to go out and walk it later lighting it with candles. Saying good bye to the dark days and linking this year with next year on the 21st December 2010...
I will be posting more pictures on Facebook later so keep an eye there.
Posted by Ballygarrett Art Studio at 5:18 PM