I think it all started with a tweet that I saw from David Sandum. 140 characters and that was it. Around the 21st of October you can read all about it here http://davidsandumart.posterous.com/call-for-artists-twitter-art-exhibit-in-moss.
For my part I had chatted via twitter with David once or twice, I liked his work and what i knew of him i liked and respected. So if he was going to organise a fundraiser to raise money for a local library in Norway by inviting artist all over the twitter-sphere to join in, well it would have been rude not to.
Postcards size was what he wanted and I do love postcards.
I was in but getting down to the brass tax of making the miniature work was more challenging. What to send? What to make that represented how I work and supported what David was trying to do. 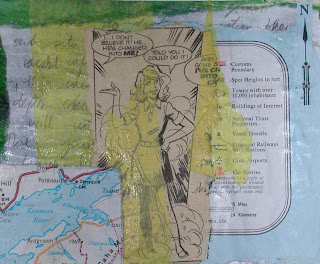 I had just finished my successful Of earth and soul, exhibition and workshop sessions at the Wexford Fringe. I was on the creative curve that requires rest and re-cumulation of creative energy before another up cycle. So I was tired and trying to work less, walk more and play a little.
Eventually I started with a montage a map, an old girls magazine and a letter. I like the idea of the text "I told you I could do it!" as a central focus.
Montages are funny things sometimes they just need a muted layer of tracing paper and some script over them and they are perfect but this demanded that I painted with intent and send a representational piece of my style of work. So painting began and after that some stitching. The roads were re-highlighted to continue on and add definition with some beads. 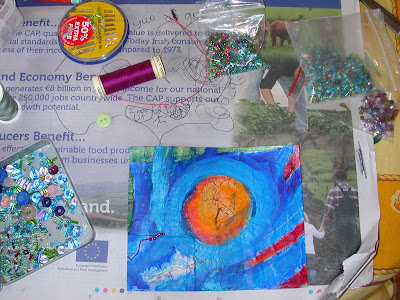 My seven year old had great fun doodling on the news paper as I was stitching. If you look at the Of earth and soul exhibition you will find the painting Trust has a link to this piece.
The work was sent off to David in Norway as soon as it was dry. He noted that it arrived on November 7th. 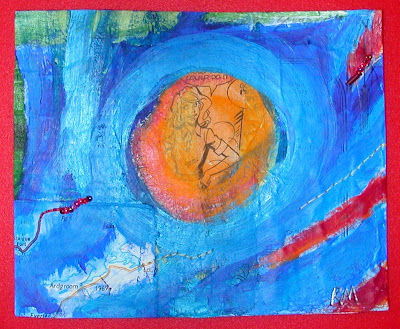 Now it sits on a wall in a Norwegian Library. My postcard is easily spotted second from the top technology is amazing. This is an image shared from the Moss Library Flickr images of the exhibit.
On twitter the chat continues about the exhibit @DavidSandumArt: The coolest thing about #twitterartexhibit are the computers next to wall. People go online/twitter and look up their favorite artists.
So congratulations to David for doing such a great job and being so inspiring.
Twenty countries X 260 artists joined through twitter to raise funds for children's books in Moss, Norway. I love this story of the power of twitter, social media, one mans idea and the courage of his convictions to just 'Do it'. I love it has raised his profile as an artist, activist, solver, fund raiser and man about art. I love that Moss Library will have a fund for children's books. I love the fact that 260 artists participated with a postcard. All he asked was would we join in and we responded.
Well Done David!
Posted by Ballygarrett Art Studio at 7:55 AM

I also participated in this exhibit. It was a lot of fun and it looks like it is turning out to be a great success. My painting can be seen in the top row, fourth from the right.

Hey Carolyn, I just started following you this morning on Twitter. I noticed you had a lovely watercolour of somewhere in Ireland. Amazing that we are so close on the Moss Library Wall and here we are connected.