I had the most hilarious conversation with Sandra Austin during the week of Bloom about the possibility of using a small process painting that I considered not finished and not worthy of developing...
I'd been working with The Community Garden Network with a few things recently. Mainly because Dee of Greenside Up and I, are mates. We've gotten to know each other the last few years via social media and well yeah we are firm friends and business associates now. We got to know each other via twitter a couple of years ago and then started meeting up regularly with a small group, Dee is the kind of person whom gives so much to community and her work the sort of person you'd bend over backwards for.
Anyway I spent the pre-Bloom Tuesday yarn bombing their show garden for Bloom 2013 with a group of 12 teenage girls from Navan. Great bit of fun although I did feel the pressure to get it done and looking good.
The great news is the yarn bombed tree was getting a response, which is fab!
The funny conversation I had with Sandra that Wednesday evening centred around the background board which is painted cream and was considered too blank.

After tossing around a few ideas via text and email that afternoon. I stood in my studio and dug out a lightly yellow painted canvas with mono printed leaves in blue and green on it. Took a photo of it and emailed it to Sandra as a possibility for the background. She loved it!
While discussing it Sandra checked with me if I was okay to have a canvas outdoors for five days... my response 'yes its a light painted acrylic on canvas I'll never show it' then I burst out laughing! erhmm Bloom has an expected 80,000 visitors to attend  as Sandra pointed out and here am I saying I will never show it.
These are the images from when I was making it. 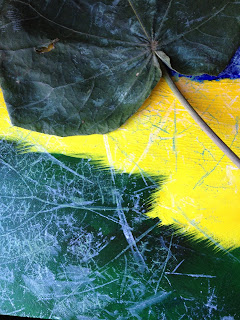 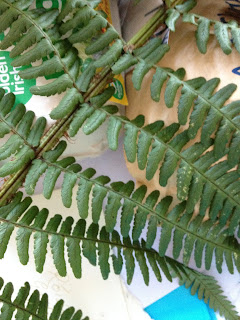 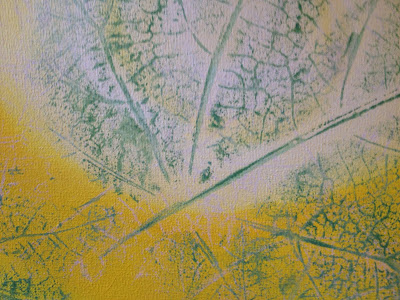 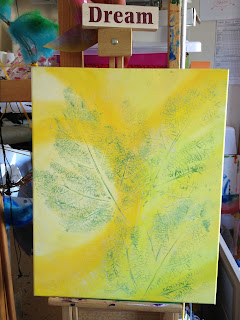 Dee has written a great post http://greensideup.ie/bloom-2013/ and you can read my posts over on my CreativeDynamix blog here.
We agreed in the end the piece did n't work and reverted back to some yarn bombed items.
I still don't think the canvas is very good, must ask Sandra if she wants to keep it!
Just thought you'd appreciate the story...
Posted by Ballygarrett Art Studio at 12:24 AM

Grinning my head off for several reasons! Thank you, the feelings mutual but also your painting was on show! We painted the back board green so hung it on the back all week as it was highlighted beautifully!! It's currently propped up on my landing, somewhere safe. Love it and love reading how it was made x

That makes it even funnier! so glad I decided to share the post now - I was in two minds. I might never have known it was shown - funny to ponder that. Glad you love it! Its good energy in it but [heehee] still don't think its any good for showing!

:-) Am sorry I missed Bloom--BUT I hope I can catch up with you two SOON! Creative women weaving ideas,fun, chatter & plans-- the best type of day out!