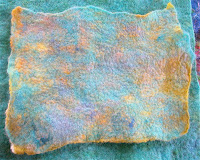 October was fun! I started teaching felt making workshops again titled 'The magic of felt', everyone that came rally enjoyed them and were so impressed that they made a piece of fabric out of fleece. It inspired me to make some new felt also. This one is for stitching... 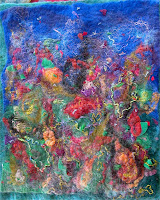 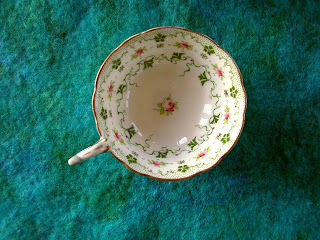 I also picked up these adorable little cups in a local charity shop. The rose motif is 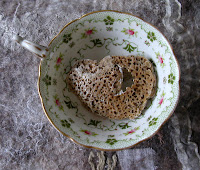 so sweet and the green colour still so vivid on this eighty year old hand painted crockery. More photos and information about these cups here.

Of course it was great to work with Wexford County Councils Enterprise and Community Department on my 'creativity for boosting morale and self esteem project' otherwise known as 'the postcard project' on the 16th of October. You can read about it over at the CreativeDynamix blogspot by following both links. The follow up writing thank you and great quotes on the postcards was fun to do and also gave me time to think about the project and further applications of the idea. I was further inspired by the quotes. I started working on a series of images to be printed onto textiles for beading and stitching; the theme maps and quotes. I am working on progressing the designs, patterns and applications to textiles, clothes or prints for framing. A preview of the initial work 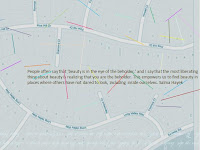 I got exciting news in October that my tender for Art Alongside Programme has been placed second in order of merit! I am waiting to here more about what this actually means but its positive.
What else has been going on? Yes. I have been having very interesting discussions and extending my network in Ireland and globally. Growing my creative lab network of thinkers, doers and creative's all very exciting stuff. I'm really enjoying the way twitter is connecting me to like minds directly. More of that this month.
After my October blog post I spent some time looking at that work from a decade ago.
I realised that something very specific was going on and I was getting to respond to it if I would stop and make space for it. So that is what I did I stopped and made space for that work to look at it to think about it to just be with it.With the help of a friend and healer Catherine Maguire that window from the past has become a door. The transition happened quickly.
Imagine a door opening into a fruitful garden (a cliche I know but that is the image that comes to mind as I write). It feels good to be in the flow of work that is being communicated back and forth between my current reality and my artistic response to a previous reality. It has opened a very interesting space to work in linking loss in general in my life. As I have written before 'Loss is part of my life'. I am processing and expressing that loss and other things in meaningful images. I have posted a new image as the first image in response to the work from 10 years ago. I am working towards an exhibition with experiential workshops based on the work (1999-2009) which will be referred to as the 'inland series' dates March and October 2010.
If the images are meaningful to me that is enough or is it...
Posted by Ballygarrett Art Studio at 3:52 PM

Email ThisBlogThis!Share to TwitterShare to FacebookShare to Pinterest
Labels: Art and soul, Roisin Markham arts practice, What I am working on

I'm very happy that things are coming together for you. Hope this continues.