During the week I was cleaning the house in anticipation for the open day today and the Women in Business Networking session yesterday morning. I don't know if your house is the same but we seem to end up with piles of papers, bits of Lego, toys, books and general mishmash of things on top of a table in the sunroom. As I was decluttering the space I came across a box which I knew was special.
I had forgotten about it it just lay there for ages in a pile of junk ignored. 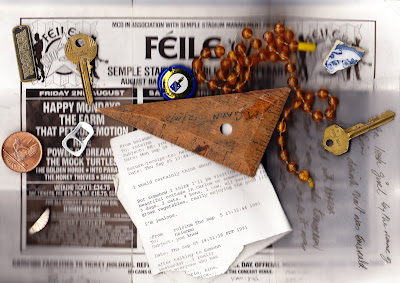 The box contained letters from my boyfriend written from Germany in 1991, a set of New Orleans Mardi Gras beads, two keys (I no longer remember the significance or the location of the where they unlock), an old pingin coin 1968, a parking pass and itinerary to Feile '91, the set square belonged to paternal Grandmother and is marked 12/10/33 M. Gavin, two halves of different shell rings from 1989, some valentines cards (the cutest one talking about the average person needing 300 hugs a month to remain health, happy and secure...). It also contained some things I had written:
A funny Limerick with no date:

An Irish girl by the name of Roisin,
had a drink that was Emerald Green,
she noted with horror that it was already tomorra
And wondered where it was she had been

...and the wail of children but are cats, fills the night air (this was written about 10 years ago)

There is a poem written out by hand by Micheal Davitt called 'Lovers' that I would love to reproduce here but won't without the author's permission. An extract from a Luka Bloom song written out on a post-it note.

A quote
"Do not wish to be anything else but what you are, and try to be that perfectly" Saint Francis of Assisi